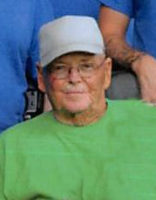 John passed away Thursday, January 2, 2020 in Cape Coral, Florida, near Pine Island where he has been spending the winters since 1989.

He was born September 12, 1939 in Plainwell the son of Carl and Margaret (Ames) Lovett. John was a 1957 Otsego High School graduate and lifelong resident of the area. On June 25, 1960 at the First Congregational Church of Otsego he married Sue Galloway, his wife of 59 ½ years, who survives. In 1972 with his father he started Lovett Driveway Company and worked for over 40 years until his retirement. John enjoyed car racing, pony harness racing, fishing, farming, hunting, bowling, golfing, camping, snowmobiling, western movies and books and coaching his grandchildren.

Contributions in memory of John may be made to the American Diabetes Association or the American Kidney Fund.

Offer Condolence for the family of John C. Lovett Sr.