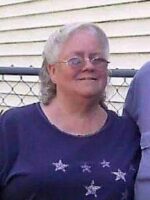 She was born December 27, 1946 in Plainwell, the daughter of Irving and Ethel (Fletcher) Fuller. Jenny worked at Kmart, the Kellogg Biological Station and owned and operated Jenny & Ron’s Market. Jenny loved doing crafts, puzzles and word searches. She enjoyed collecting Coca Cola memorabilia, but preferred drinking Pepsi. Jenny liked traveling out west, viewing wild life, watching the squirrels and camping. She loved her grandchildren, great-grandchildren and her dogs. On February 14, 1964 at Otsego Church of God she married Ronald Pillars who survives.

She was preceded in death by her parents; daughter, Pam; granddaughter, Ronda Lee and by her siblings, Irving Jr., Raymond, Rosie, Donna, Pat, Bea and Carol.

Friends may visit with Jenny’s family starting at 10:00 A.M., Saturday, June 11, 2022, at the Winkel Funeral Home, Otsego, until the time of the memorial service at 11:00 A.M., with Celebrant Bill Rose officiating.

Contributions in memory of Jenny may be made to the Alzheimer’s Association.

Offer Condolence for the family of Jennifer E. Pillars