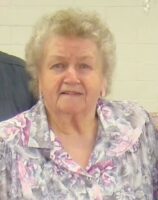 Janet passed away Tuesday, January 3, 2023 at her home in Otsego.

She was born February 2, 1935 in Marshall, the daughter of Clifton and Geraldine (Hildebrandt) Snyder. Janet was a 1953 Otsego High School graduate and lifelong resident of the area. For many years Janet was a clerk for the City of Otsego until her retirement in 1997. In her free time she enjoyed doing word search puzzles, going to the casino and collecting coins. On June 30, 1956 at St. Margaret Catholic Church in Otsego, she married Joseph Kronke who passed away in 1971.

She was preceded in death by her parents, husband and sisters, Mary Lou and Trudy.

A graveside service will take place at St. Margaret Cemetery in Otsego at a later time.

Contributions in memory of Janet may be made to Wings of Hope Hospice of Allegan.

Offer Condolence for the family of Janet L. Kronke