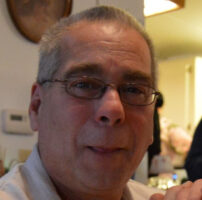 Jim passed away unexpectedly Friday, September 25, 2020 at his home in Plainwell.

He was born September 20, 1961 in Grand Rapids, the son of James and Jacqueline (VanEss) Warner. For many years, Jim was a truck driver for Nagel Construction Company. In his free time he loved deer hunting, walleye fishing and as a young man enjoyed salmon fishing. Jim liked tinkering on projects not always completing one before starting another.

He was a good helper and wasn’t afraid of getting into a little trouble. Jim had a great sense of humor, he loved teasing his grandchildren and would always say goodbye to them with a giant bear hug. On September 8, 2008 on the beach at Gun Lake he married Debra Sheppard who survives.

Also surviving are his children, Amy (Randy) Bender of Martin, Jonathan (Renee) Langford of Otsego, Jamie (Christina) Duncan of Oklahoma and Bradley (Lindsey) Warner of Plainwell along with 10 grandchildren.

Contributions in memory of Jim may be made to the National Autism Association.

Offer Condolence for the family of James W. Warner Jr.