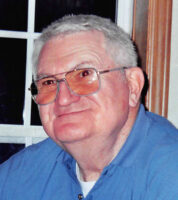 Jim passed away Friday, June 18, 2021 at Stanford Lodge in Plainwell.

He was born December 6, 1933 in Kalamazoo, the son of Luther and Elizabeth (Anthony) Harvey. Jim was a 1952 Otsego High School graduate and lifelong resident of the area. He worked at Mac Sim Bar, Otsego Creamery and at Kal-Creamery from 1981 until his retirement in 1995. For over 40 years he was a member of the Otsego Moose Lodge, the Teamsters Union and the Allegan Draft Mule Association.

He attended Alamo Community Congregational Church and Otsego United Methodist Church. Jim was known for his many catchphrases and enjoyed telling jokes and making people laugh. He liked spending time with his family, volunteering at Bowens Mills, good conversation and will be greatly missed by his family and many friends.

He was preceded in death by his parents and brother, Marlan.

A memorial service will be held at 11:00 A.M., Wednesday, June 23, 2021 at the Otsego United Methodist Church with Pastor Joe Shaler officiating.

Jim’s family would like to thank the staff at Stanford Lodge for their care and friendships with Jim. He bonded with you all, thank you.

Contributions in memory of Jim may be made to Christian Neighbors or the animal rescue of your choice.

Offer Condolence for the family of James Harvey