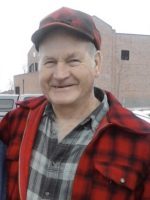 He was born January 31, 1940 in Kalamazoo, the son of William Menck and Edith (Savage) Cannom. Jim had worked at Michigan Gas Utilities until his retirement in 1994. After retiring Jim went to work at a well drilling company in the area. He had been the Trowbridge Township Supervisor and Assessor for many years.

In his spare time Jim enjoyed hunting, fishing, trapping, woodworking and gardening. He loved spending time with his family, farming together and taking trips up north. On November 8, 1958 in Kalamazoo he married Katheryn Riley who survives.

He was preceded in death by his parents and sisters, Kathy and Susan.

Contributions in memory of Jim may be made to At the Master’s Feet Discipleship Ministry.

Offer Condolence for the family of James F. Menck