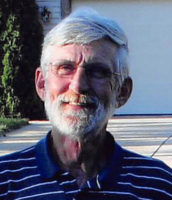 Jim passed away Tuesday, January 28, 2020 at his home in Plainwell.

Jim was born November 20, 1943 to Walter and Gertrude (Lauer) Boettcher of Otsego. He proudly served his county in the U.S. Navy from 1962-1966. Jim had worked at Parker Hannifin, Kal-Equip and retired from plastering in 2002. In his free time he enjoyed golfing and being outdoors.

He was preceded in death by his parents and a son, Bruce Boettcher.

Friends may visit with Jim’s family starting at 10:00 A.M., Thursday, February 6, 2020 at the Winkel Funeral Home, Otsego, until the time of the funeral service at 11:00 A.M., with Pastor Steve Smail officiating.

Burial of ashes will take place at Fort Custer National Cemetery at a later time.

Contributions in memory of Jim may be made to Wings of Hope Hospice.

Offer Condolence for the family of James Boettcher