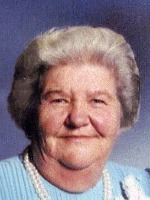 Irene Mae Weeks of Allegan, Michigan, died Friday, February 16, 2007 in Holland. Mrs. Weeks was born June 18, 1920 in Boyne City, MI to Philip and Mary (Wheaton) Vickery. On February 28, 1938 in Otsego she married Frank D. Weeks who died in 2003. Also preceding her in death were a son, Phillip Weeks; 3 brothers, Clifford, Bill and Harry; and 2 sisters, Juanita and Esther. Surviving are 10 children, Lloydeen LaHuis of Dorr, James Egan of Three Rivers, Ronald Weeks of Bradford, TN, Diane Hitchcock of Allegan, Richard Weeks of Holland, Roger Weeks and Mary Harris both of Allegan, Betty Deur, Ruth Gordon and Jim Weeks all of Hamilton; 36 grandchildren; 32 great-grandchildren; 9 great-great-grandchildren; many nieces and nephews. Friends met the family from 2 to 5 P.M. Saturday at the Winkel Funeral Home, Otsego, where funeral services will be held at 1:00 P.M. Monday, Pastor Jeff Gilbert officiating. Burial will follow at Mountain Home Cemetery, Otsego. Contributions in memory of Irene may be made to Hospice of Holland, Hospice House.

Offer Condolence for the family of Irene Mae Weeks