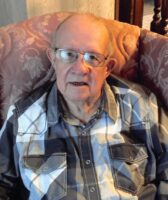 Harry passed away, Sunday, January 8, 2023 at American House in Jenison.

He was born July 17, 1931 in Metcalf, Illinois, the son of Lex and Vera (Stark) Thompson. Harry owned and operated Thompson Electric and was co-owner of Professional Code Inspections. As a young man Harry enjoyed car racing and spending time at the Kalamazoo Speedway.

He also liked hunting, watching golf and football and spending time at his cottage up north. He was a member of the Otsego Elks, was a scout master when his boys were younger and served on the Otsego City Planning Commission. On February 24, 1951 in Otsego he married Nanette Judd who passed away in 2006.

Surviving are his children, Katherine (Bill) McLoud of Jenison, Tom Thompson of Middleville and Sue (Greg) Morrison of Jonesville; 16 grandchildren; many great-grandchildren; siblings, Marcia Thompson Slusher and Max Thompson both of Kentucky along with several nieces and nephews.

He was preceded in death by his parents; wife; son, Dick Thompson and daughter-in-law, Wendy.

Friends may visit with Harry’s family starting at 10:00 A.M., Thursday, January 12, 2023, at the Winkel Funeral Home, Otsego, until the time of the funeral service at 11:00 A.M., burial will follow at Mountain Home Cemetery in Otsego.

Contributions in memory of Harry may be made to Boy Scouts of American Troop 98 of Otsego.

Offer Condolence for the family of Harry E. Thompson