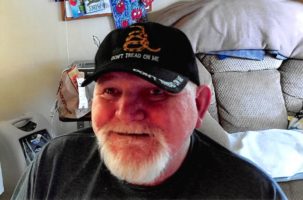 Guy passed away Sunday, February 2, 2020 at Borgess Hospital in Kalamazoo.

He was born July 2, 1949 in Plainwell, the son of Carl and Martha (Coder) Holloway. Guy served his country in the U.S. Army. He had worked as a delivery driver at Joe’s Pizza in Plainwell, as a mechanic at Plainwell Lanes and at several area factories over the years. Guy had spent the last 3 years living at Fairview Nursing Home in Centreville.

Surviving are his children, Joey Ellis, Martha Sherwood, Ben Holloway, Derek Snyder and Jeannette Bayyapuneedi; many grandchildren; sister, Dorothy Irving along with many nieces and nephews.

Friends may visit with Guy’s family from 5-8 PM, Thursday, February 6, 2020 at the Winkel Funeral Home, Otsego.

Contributions in memory of Guy may be made to Christian Neighbors.

Offer Condolence for the family of Guy T. Holloway