You are here: Home / Obituaries / Glenda May Rogers 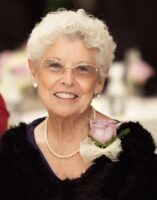 Glenda May Rogers, 88 of Otsego, Michigan, went to be with her Lord and Savior on Friday, April 8, 2022 surrounded by her family.

Born August 6, 1933 in Allegan, Michigan, she was the daughter of the late Glenn Grigsby and Ruby (Bergh) Grigsby, and the wife of the late Dale Rogers. Glenda was a member of Merson church and very involved in women’s ministry and music. She was a member of the Gospel Team and hosted many missionary families. Dale and Glenda Rogers were the owners and founders of Rogers Plumbing and Heating in 1966. Glenda loved gardening, swimming, traveling and singing. She was a giving and nurturing woman who enjoyed her grandchildren and great-grandchildren. The beautiful memories made over the many years of her life will continue to bring smiles and laughter to her family.

In addition to her husband she was preceded in death by her parents and her brother, Elmer Grigsby.

Friends may pay their final respects on Monday from 11- noon with service following at Winkle Funeral Home.
An interment will be held at Trowbridge Methodist Cemetery following the service.

In lieu of flowers Contributions in memory of Glenda may be made to the Merson Church, 3313 102nd Avenue, Gobles, Michigan  49055 or Centrica Care Navigators (formerly known as Hospice of South West Michigan). Gifts may be made online at centricacare.org or mailed to 7100 Stadium Drive, Kalamazoo, MI 49009.

Offer Condolence for the family of Glenda May Rogers