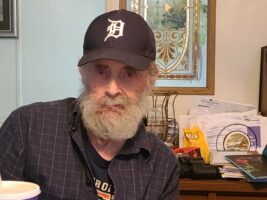 George passed away Monday, September 12, 2022 at the Wings Home in Allegan. He was born April 24, 1951 in Three Rivers, MI to Walter and Patricia (Nastos) Travis.

He attended St. Margaret Catholic School and graduated from Otsego High School in 1970. Through high school he worked at Orchard Hills Golf Course. Following graduation he began working for Consumers Energy as a draftsman. From 1972 to 1976 he served his country in the U.S. Air Force where he was trained as a dental technician. Following his service he began working as a dental technician at the Michigan State Technical Institute where he worked until retiring. He also found time to work at Aries Café in Plainwell. George had a passion for the game of golf, bowling and cooking. He was a sweet man who will be missed by his family and friends.

On March 10, 1990 he married Esther Cutler who survives. Also surviving are his sons, Jeffery Travis of WA and Michael Travis of Kalamazoo; granddaughter, Ellianna Rose Travis; siblings, Patricia Travis and Brian Travis and by many nieces and nephews. He was preceded in death by his parents and by his sister, Walda Jane Travis.

According to his wishes cremation has taken place. A memorial service will be held on October 11, 2022 at 11am at St. Margaret Catholic Church in Otsego.

Offer Condolence for the family of George Travis