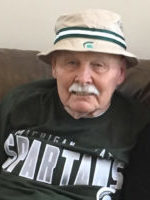 George Russell “Russ” Colegrove, 93, passed away Friday, January 11, 2019 at his home in Grand Junction, surrounded by his family.

Russ was born in Billings, Montana on February 18, 1925 to Raymond and Lois (Warrant) Colegrove. He graduated from Otsego High School and served in the U.S. Army Air Corp during World War II and in the U.S. Air Force during the Korean War. After World War II, Russ attended Michigan State College.

He had worked at Valley Metal Products and several architectural and engineering companies as a mechanical engineer. Russ retired from Tower, Pinkster & Titus in 1998. He completed his college degree in organizational management at age 78.

Russ had a reputation of being able to fix anything and was affectionately called Mr. Fix-It by many of those at Warner Camp and Warner University where he enjoyed volunteering his time and talents. Russ also enjoyed fishing, carpentry, deer hunting and spending time with his family.

On January 26, 1952 at the Otsego Church of God he married Beverly Gregory who survives.

He was preceded in death by his parents, and brothers, Harry, Tom and Dave.

A funeral service will be held at 11:00 A.M., Tuesday, January 15, 2019 at the Otsego Church of God with Pastor Timothy Foreman officiating with Pastor Stephen Burrow and Pastor Steve Starks.

In lieu of flowers, contributions in memory of Russ may be made to Warner Camp or Wings of Hope Hospice.

Offer Condolence for the family of George R. “Russ” Colegrove