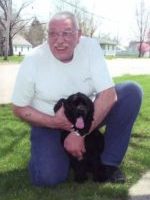 He was born April 22, 1945 in Berea, Kentucky to Cleo Anderson. From the age of 10, George was raised by his foster parents, Davis and Hazel Westcott. He had worked at Menasha for more than 35 years and had been a reserve officer for Allegan County and Plainwell police departments.

In his spare time George enjoyed having coffee with his coffee club and best friend, Kenny Wall.

In 1968 at the First Baptist Church in Otsego he married Ellen Hummel who survives.

He was preceded in death by his mother and foster parents.

Contributions in memory of George may be made to Wings of Hope Hospice.

Offer Condolence for the family of George E. Hoots