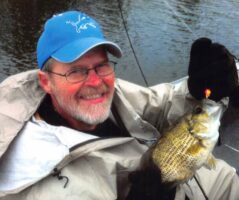 Gary Louis Peter Chase was welcomed into Heaven on Monday, December 20, 2021. He passed peacefully at his home in Galesburg after battling end-stage renal failure.

He was born September 17, 1951 in Dearborn, the son of Stanley Jr. and Flora (Ratiu) Chase. Gary attended Our Lady of Grace, St. Mary’s school, Hackett HS (Class of 69) & graduated from WMU in 1975 with a BA in Marketing. He worked at Gull Lake Country Club to pay his way through Hackett. While attending WMU, Gary worked for Meijer where he met the love of his life Joy (aka Joyful Ann Honey) Merrill. Gary was hired in 1978 by the U.S. Postal Service. He worked as an LSM operator, expeditor and express driver until his retirement in 2013. He made lifelong friends everywhere he went.

In his spare time, he enjoyed hunting (aka playing poker with his deer hunting buddies), fishing, traveling with Joy, doing yardwork and swimming at the MN house, winning cornhole, transporting vehicles for Ford, playing Santa Claus at the annual Merrill Christmas parties, animal rescue, cheering for the Wolverines, Lions, and Tigers and volunteering at West MI Cancer Center.

Gary had a wonderful sense of humor and a smile and joke for all of us. He looked forward to Sunday family dinners followed by lively board games. He loved hosting 4th of July parties (where there were some close calls with the fireworks but no lost digits), going on family vacations up-north to Onaway and siblings weekends and dinners. Family was always his top priority. On October 27, 1973 at St. Margaret Catholic Church, he married Joy Merrill, who survives.

He was preceded in death by his parents; brother Ricky; mother and father-in-law Richard and Bernice Merrill, and brothers-in-law Rick and Pat Merrill.

According to Gary’s wishes, cremation has taken place.

Friends may meet with Gary’s family from 5-8pm on Friday, January 7 at the Winkel Funeral Home, Otsego. A memorial mass will be held at 11:00am on Saturday, January 8 at St. Mary’s Catholic Church in Kalamazoo.

The family would like to thank Gary’s medical team including DaVita Dialysis, Drs. George Adam and Jim & Jack Hunt.

Please smile and think of Gary every time you hear a Bob Seger song or shoot a rubber band at someone.

Contributions in memory of Gary may be made to the Ronald McDonald House.

Offer Condolence for the family of Gary L. Chase