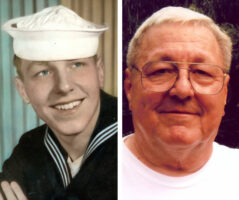 Frank passed away Tuesday, March 30, 2021 at the Timbers of Cass County.

He was born March 16, 1936 in Evanston, Illinois, the son of Frank and Marion (Ekkila) Rayburn. Frank attended New Trier High School in Winnetka, Illinois and graduated in 1954. He proudly served his country in the U.S. Navy from 1954 to 1958 on the USS Tombigbee. He was stationed on the west coast and transported airplane fuel to Hawaii and the Arctic Circle.

Frank worked at Parker Hannifin for 30 years, Eaton Corporation for 5 years and retired from Parker Aerospace in 2001. In his free time he enjoyed fishing and wood working. He was a member the Otsego Elks Lodge.

He was preceded in death by his parents; wife; son, Todd Rayburn; son-in-law, Rob Engelter; twin granddaughters; siblings, Lois and Nancy and his dog, Emma.

Contributions in memory of Frank may be made to the Alzheimer’s Association.

Offer Condolence for the family of Francis L. Rayburn Jr.