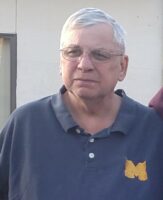 He was born November 27, 1947 in Bay City, to Floyd Sr. and Maida (Rowley) Shettler. Floyd attended Handy High School in Bay City and graduated in 1965. He proudly served his country in the Army National Guard. For many years Floyd worked at General Motors at the Saginaw Steering Plant until his retirement in 1996.

He enjoyed following Detroit sports teams and U of M Football. Floyd loved watching his grandchildren play sports and taking trips to the casino. On December 7, 1968 he married Linda Meier. They spent 21 years together and had 2 children. In 1990 he married Mary Fabara who passed away in 2004.

Surviving are his children, Michael (Regina) Shettler of Martin and Jennifer (John) Bremer of Chesaning; grandchildren, August, Sophia and Gracie Shettler, Austin and Andrew Kolka and Jenna Bremer; sister, Sharon Graw along with many nieces and nephews.

He was preceded in death by his parents, second wife, Mary and sisters, Lyla York and Barb Neveau.

A private family burial of ashes will take place at a later time.

Contributions in memory of Floyd may be made to Martin Public Schools Athletics Department.

Offer Condolence for the family of Floyd J. Shettler Jr.