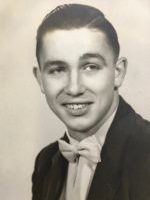 Gene will be lovingly remembered by his son Kelly J. Cronkhite, his daughter/son in law Lorie and Mike Bartz, his granddaughters McKensie and Samantha and several nieces and nephews.

He attended Otsego High School and was a veteran of the Army where he finished his high school academics, received the good conduct medal and served his time in Alaska.

For many years Gene worked for Michigan Cottage Cheese and retired from Yoplait USA where he was a member of the Teamsters and Union Steward.  For most of his life he enjoyed gardening, hunting, playing cards, dancing, time at the casino, and spending time at the Elks and VFW.

Gene was preceded in death by his father, Ivan; mother, Elsie Berry; wife and first love of 40 years Judy; his siblings Donna Walters and Jim Cronkhite;  Bev Gauthier who was the second love of his life of almost 20 years; his sister in law, Sharalyn Davis and brother in law, Carl Walters.

The family would like to extend a special thank you to the staff at Wings Home and Wings of Hope Hospice for their compassionate care during the final last few months of his life.

At Gene’s request cremation has taken place and a private memorial service will be held at a later date with his children and grandchildren.

In honor of Gene, contributions may be made to Wings Home, Allegan Michigan.

The family welcomes memories and messages online at www.winkelfuneralhome.com

Offer Condolence for the family of Eugene Cronkhite