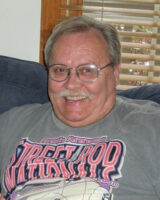 Edward “Buddy” Koehrn II of Plainwell, MI passed away peacefully in his sleep, Wednesday, April 20, 2022 at his home in Plainwell.

He was born November 20, 1949 in Beech Grove, Indiana, the son of Edward and Barbara (Robinson) Koehrn. From a young age, Buddy loved anything that ran on gasoline! To his very core he was an avid Street Rodder and enjoyed traveling to thousands of car shows with his friends.  As a matter of fact, his daily “uniform” featured a car show t-shirt and jeans.  It was rare to see him in anything else.  One of his greatest joys was being fortunate to own many different street rods throughout his lifetime.  He had an impressive knowledge of all things related to cars. A passion that Buddy developed later in life was hunting for and acquiring vintage gas pumps and antique gas pump globes, as well as finding a good deal on regular items at garage and estate sales with his wife by his side.  He was incredibly proud of his vast collection. Buddy also loved spending time with his family, friends, and his toy poodles.

To know Buddy Koehrn was to understand the quote, “He never met a stranger. Every person in the world, to him, was just a friend he hadn’t met yet. He always saw the good in people.”  The man could talk! On July 31, 1999 at a Fort Wayne, Indiana car show he married Denise “Annie” Wallace who survives.

He was preceded in death by his parents, step-mother, Connie Koehrn, and daughter, Stacey Schmitt.

According to his wishes, cremation has taken place.

Contributions in memory of Buddy may be made to Wings of Hope Hospice.

Offer Condolence for the family of Edward “Buddy” Koehrn II