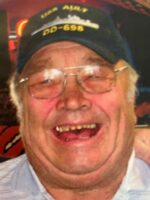 Dwain A. DeBack, “Butch”, passed away Tuesday, December 6, 2022 in the care of Hospice, Englewood Florida. He was born on May 2, 1936 in Kalamazoo, MI, the only child of the late Lawrence DeBack and Eileen DeBack, (nee) Hendrickson. Butch graduated from Kalamazoo Central High School in 1954. He played the trumpet in band and played for the Dick Forsman Band in his spare time. He joined the U.S. Navy, serving on a destroyer, the U.S.S. Ault, patrolling the post Korean War Mediterranean Sea. Upon his return stateside he married the love of his life, Wanda Geschwendt and took employment with the local newspaper, The Kalamazoo Gazette, in the stereotype department. Together Butch and Wanda raised their family, first in Kalamazoo and later in the country near Otsego where they started a Christmas tree farm. Their love was tested when they lost their son Dennis in a tragic motorcycle accident in 1978. All who knew Butch knew how this impacted him tremendously.

Butch retired from the Gazette in 1991 and Wanda convinced him to winter in Florida, where he loved to fish on his boat. Summers were spent in South Haven, MI visiting family and friends. Although he enjoyed Florida, his heart was always in Michigan.

Butch was a sports enthusiast his entire life. His support of the Detroit Lions and Tigers never failed. Many weekends the neighbors in South Haven were treated to his rendition of the Michigan Fight Song on his trumpet. He was especially proud of his grandchildren’s athletic endeavors and rarely missed their volleyball and soccer games. Growing up in a hunting and fishing family Butch enjoyed feeding his family the old fashioned way. This outdoor tradition he passed on to his daughter and grandchildren. Butch and Wanda accumulated many wonderful friends along their journey together. His friends knew his sense of humor was unparalleled and stayed with him until the end. He always believed that a person should be valued by the number of friends they have, not by the size of their wallet. He was a rich man by these standards. Butch will be missed by all who knew him, but especially his wife of 64 years, Wanda, his daughter, Vicky Lynn, and his loving grandchildren, Dana, Dominic, and Dakota, and his beloved cousins.

Memorial Donations may be made to South Haven Hospice at Home, South Haven, MI.

Offer Condolence for the family of Dwain “Butch” DeBack