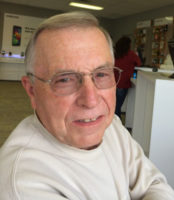 Doug passed away after an extended illness, Friday, January 3, 2020 at Medilodge in Portage.

He was born August 26, 1942 in Lansing, the son of Harvey and Rosetta (Newburn) Quick. Doug proudly served his country in the U.S Navy. For over 35 years he had worked at Jim Koestner in Plainwell until his retirement.

Burial of ashes will take place at South Martin Cemetery at a later time.

In lieu of flowers contributions in memory of Doug may be made to the Otsego Church of God.

Doug’s family would like to thank the staff at Grace Hospice, Medilodge and the VA for their care and support.

Offer Condolence for the family of Douglas R. Quick