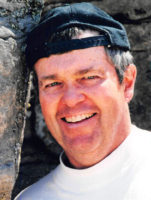 He was born April 19, 1950 in Grand Rapids, the son of Arnold and Elaine (Warner) Bohjanen. Doug was a graduate of Portage Central High School and attended Kalamazoo Valley Community College and Western Michigan University.

For many years he had worked at several area paper manufacturing companies. In his younger days Doug was an avid runner and cross- country skier and competed in many races throughout the Midwest.

Doug loved being outdoors. Whether it was camping, hiking, hunting or fishing, that is where he felt most at home. He considered himself an avocational archaeologist. He spent many hours in the field looking for arrowheads and other Native American artifacts. He loved Native American culture and attended many powwows with his brother Bob.

Doug was a huge fan of the Green Bay Packers and spent every football weekend listening to his beloved Packers games on the radio with popcorn and pop in hand.

Surviving are his brothers, Robert (Virginia) Bohjanen of Kentwood and David (Lori) Bohjanen of Kalamazoo and nieces and nephew, Lindsay, April, Steven and Andrea.

He was preceded in death by his parents and nephew, Michael Bohjanen.

A celebration of Doug’s life will be held at a later time.

Contributions in memory of Doug may be made to the Kalamazoo Nature Center.

Offer Condolence for the family of Douglas C. Bohjanen