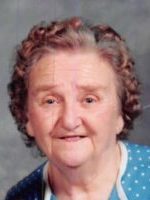 Dorothy passed away Saturday, December 29, 2018 at Bronson Hospital in Kalamazoo.

She was born on January 29, 1929 in Kalamazoo. Dorothy had grown up in Bloomingdale and as a young woman had worked at the canning factory in Fennville and Plainwell. In 1948 she married Merton Miller. Together they enjoyed fishing, camping and spending winters in Florida. After his passing Dorothy enjoyed traveling around Michigan with her daughter and crocheting blankets and embroidering pillows.

Dorothy was led to the Lord when she was 15 and her faith continued to grow. She was an active member of the First Baptist Church of Otsego and enjoyed helping different families in the church, visiting them and encouraging them in the Lord.

She was preceded in death by her parents; husband; son, John Miller and sister, Barbara Thorne.

Friends may visit with Dorothy’s family starting at 10:00 A.M., Thursday, January 3, 2019 at the First Baptist Church of Otsego until the time of the funeral service at 11:00 A.M., with Pastor Merlyn Jones officiating.

Offer Condolence for the family of Dorothy M. Miller