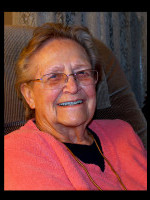 She was born October 30, 1922 in Ironton, OH to William and Catherine (VanHaften) DeHaven. Dorothy was a 1940 Plainwell High School graduate and had worked for her parents at DeHaven Soda Shop in Plainwell until the mid 1940’s. There she met Louis Beattie and on June 3, 1944 they were married in Plainwell. Together they owned and operated Beattie’s Flowers & Gifts in Otsego until the mid 1950’s. She had also worked at Dick’s Grocery and then at Otsego Party Store until her retirement. In her spare time Dorothy enjoyed golfing.

Surviving are her children, Sandra Stedman of NC and Ron (Debra) Beattie of Otsego; 4 grandchildren, Kenneth, David and Jessica Beattie and Stephanie (Jim) Fraser; 2 great-grandchildren, Jimmy and Elaina; and her sister, Betty Stewart of Gulliver.

She was preceded in death by her parents, husband and sisters, Kathleen Nay and Nancy Thompson.

Friends may visit with Dorothy’s family from 5-8 P.M. on Friday, November 6, 2015 at the Winkel Funeral Home, Otsego.

A private family burial will take place at Hillside Cemetery in Plainwell.

Contributions in memory of Dorothy may be made to the Life Care Center of Plainwell’s Activities Fund.

Offer Condolence for the family of Dorothy M. Beattie