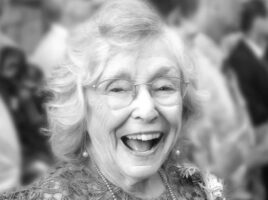 She was born in Saginaw, MI on January 1, 1924 the daughter of James and Eve (Knight) Bender. Dorothy grew up in Gladwin, MI.  She was raised by her mother, father and maternal grandparents.  Her father was a railroad man and her mother was a teacher.  Dorothy always loved recalling her childhood. Her favorite memories entailed helping her Grandpa on the farm, playing in the sand, picking berries, and going fishing in the river behind the barn with Grandma and Grandpa.  Her fondest memory was sitting on her Grandpa’s lap in the big black chair in front of the wood stove on cold winter nights.  She also loved the Ralston (her Grandma Knight’s) family reunions where they traveled across a shallow river to a picnic grove to gather.  They didn’t have a car until she was 14 but enjoyed rides in a wagon drawn by two horses.  She’s been known to say she grew up in the Great Depression but didn’t realize how poor she was.  Her childhood was filled with love.

Dorothy was the oldest of three children.  She had a brother James (Bud) who was born when she was 4 years old and a sister Nancy who was born in 1939, when Dorothy was 15. She grew up loving school and friends.  She graduated from Gladwin High School and continued to attend high school reunions right into her nineties.  After high school she attended Central Michigan University, where she joined a sorority, and kept in touch with some of her sorority sisters well into adulthood. She finished college with a teaching degree.  She began her teaching career in Carrollton Township where she met the love of her life.  While celebrating a friend’s birthday at a dance hall she spied Robert Krieg.  He was a good dancer and she liked his looks!  She was told that he never dated anyone more than two or three times and she wanted to prove them wrong.  He later said he “chased her until she caught him”.

Robert and Dorothy were married on Feb. 25, 1950 at St. John’s Lutheran Church in Zilwaukee, MI. They welcomed four children; Robert Jr., Theodore, Jeffrey and Kristine.  They began their family life in Zilwaukee but in 1962 they moved to Grand Haven, MI where Bob worked for Consumer’s Power and Dorothy taught 1st grade at Rosy Mound Elementary.

She was an active, busy mother.  She involved herself in many passions. She filled her home with antiques, loved gardening, knitting, sewing and baking. (The aroma of freshly baked bread was common on Sunday afternoons). She loved cats (she must have owned approximately 9 cats in her lifetime) and she loved birds!  To the point where she developed her own bird curriculum for her students – hanging bird feeders on the windows of her classroom so she could teach the children all the different types of birds as they arrived to eat from the feeders.  She often led her family through the woods for bird watching expeditions. Dorothy was ahead of her time. She cared about the environment and initiated “recycling” as a common practice in her household.  Tin cans, plastic jugs, newspapers and cardboard all were separated and driven to a special facility.  She also began family research on her ancestry – before genealogy was a trend.  She was active in church, singing in the choir and teaching Sunday School. Her children’s extra-curricular activities were a priority for her and she supported their interests. Dorothy and Bob both loved the Detroit Tigers and attended many games. She had a keen interest in Civil War History and she and Bob took their family on a vacation out east exploring the landmarks and historical spots. One summer they decided to put a pool in the back yard of their home on Oakes St. and many a gathering took place there. The family also traveled yearly to Florida for vacations with her mother and father who had retired there.

Dorothy retired from teaching in 1985. Together with her husband they built their dream retirement home on the White River in White Cloud, MI.  They spent hours and hours planting flower and vegetable gardens, landscaping their grounds and making their home a retreat for their children and subsequent grandchildren. Together they loved sitting on their deck playing Cribbage and enjoying the sights and sounds of life on the river. Many memories were made with their growing family at their home grilling, playing Croquet, tubing down the river, and playing dominoes, Uno and Skip-Bo. It would be appropriate to say that they designed and planned their retirement home with their grandchildren in mind. They took great pleasure in entertaining them. Thanksgiving dinners and Christmas Eve celebrations also ensued.  They enjoyed season tickets to CMU football games each fall. They bought a motor home and traveled the country together.  A few Caribbean cruises were enjoyed by them, including one for their 50th wedding anniversary which all four of their children and spouses accompanied them on. They joined a Lutheran church in Fremont, MI and extended their involvements there – Bob delivering sermon tapes to shut-ins and Dorothy helping with VBS and quilting projects.  They purchased a mobile home in a park in Ellenton, Florida where they traveled each winter for a few months, inviting family to come and stay! They enjoyed sharing their favorite discoveries with the people they loved.  Life was good.

Bob passed away on June 27, 2007.  Dorothy continued life on the river until June of 2011 when she suffered some health setbacks of her own.  She then moved in with her daughter in Otsego, MI and spent the rest of her life in her care; still enjoying reading, continuing her awareness of current events politically and environmentally, giving generously to organizations that benefited her passions (animals and maintaining a healthy planet), being a part of many family gatherings – getting to know her great grandchildren and more. Family had always been a main focus for her!  Friends old and new remained dear to her.  Her energy, vibrancy and zest for life rarely waned. Her toughness and resolve were admirable. Her ability to “come back” from any health challenge was beyond impressive. Her smile, infectious.

She is preceded in passing by her husband of 57 years, Robert Krieg; her son Ted, in 2018; her brother Bud and her parents.

In lieu of flowers, memorial contributions may be made to The Nature Conservancy in Dorothy’s honor.

Offer Condolence for the family of Dorothy E. Krieg