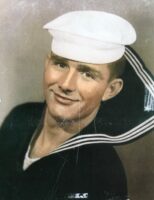 Don passed away Wednesday, June 23, 2021 at Vicinia Gardens in Otsego.

He was born July 9, 1931 in Lakeview, the son of John and Edith (Mosher) DuBois. Don proudly served his country in the U.S. Navy. For many years he worked as a press operator for General Motors until his retirement in 1995. Don enjoyed fishing, golfing and watching the Tigers play on TV. He was a member of the First Congregational Church of Otsego. On December 28, 1957 in Lakeview he married Isabella “Bella” Axam who survives.

He was preceded in death by his parents, John DuBois and Edith Grigsby; infant son, John and step-siblings, Robert Fergusson, Jack Fergusson and Jo Bunker.

Friends may visit with Don’s family starting at 1:00 P.M., Saturday, July 10, 2021 at the First Congregational Church of Otsego, until the time of the memorial service at 2:00 P.M., with Pastor Bruce VanderKolk officiating.

Contributions in memory of Don may be made to the First Congregational Church of Otsego.

Offer Condolence for the family of Donald M. DuBois