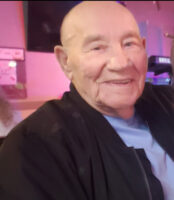 He was born March 4, 1937, in McGuffey, Ohio, the son of George and Virginia (Sturgell) Sparks. As a young boy Don moved to Michigan and attended school in Martin. After school he worked in the fields with his family, he also worked at Rockwell International then at Otsego Public Schools until his retirement in 1999.

Don loved to play cards and enjoyed traveling, taking bus trips to the casino, bowling, golfing and watching westerns. On March 31, 1956 at the Otsego United Methodist Church he married Sandra (Knight) who passed away in 1994.

He was preceded in death by his parents; wife; daughter, Terri Konecny and siblings, Roger and Jack Sparks and Alberta Marshall.

Private family funeral will be held and burial will take place at Mountain Home Cemetery in Otsego.

A link to watch the funeral service will be available for 30 days starting on Friday, November 20, 2020 at 1pm here: https://webcasts.lifetributes.com/1102434

Contributions in memory of Don may be made to the American Cancer Society.

Offer Condolence for the family of Donald G. Sparks Sr.