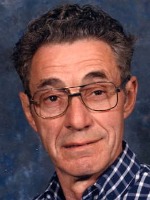 Dillard Langford of Plainwell, Michigan, died Sunday, February 18, 2007 in Kalamazoo. Mr. Langford was born March 20, 1927 in Brodhead, Kentucky to Emmit and Schrilda (Stokes) Langford. During WWII he served his country in the United States Navy. He was a life member of V.F.W. Post #3030, where he served on the color guard. For 30 years he was employed at the Plainwell Paper Mill. Dillard loved gardening, wood working, his horses and his dogs. On May 25, 1951 in Otsego he married Joyce Flickinger, who survives. Also surviving are five daughters, Theresa (Tim) Campbell of Kendallville, IN, Brenda Langford and Laura (Les)Hahn, both of Plainwell, Elaine (Craig) Thomas of Otsego and Vickie (Daniel J.) Schneider of Morley; 18 grandchildren; 22 great-grandchildren; three brothers, Louis (Christine) Langford of Lynchburg, OH, Robert (Pearly May) Langford of Reading, OH and Mac (Bev) Langford of Sharonville; a sister, Ethel Brock of Plainwell; many nieces and nephews. He was preceded in death by 5 brothers, Delbert, Elzie, James, Clifford and his twin brother, Lillard; and a sister, Atha. Friends may meet the family from 2 to 4 and 6 to 8 P.M. Thursday at the Winkel Funeral Home, Otsego, where services will be held at 10:30 A.M. Friday, Pastor Tony Shumaker officiating. Burial will follow at East Cooper Cemetery with military honors conducted by V.F.W. Post #3030. Contributions in memory of Dillard may be made to the American Lung Association.

Offer Condolence for the family of Dillard Langford