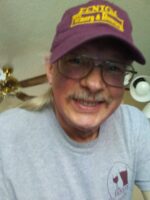 Dennis passed away Thursday, September 17, 2020 at his home in Otsego.

He was born November 8, 1950 in Flint the son of David and Gladys “Skip” (Marks) Nelson. Dennis loved music and was a musician. He was a member of several bands over the years including Wrkshop, Black Cat Bone and harmonica player for the Nelson Brothers Band. Dennis was an inspiration to many upcoming musicians. He was known to many as Denny “Never Out of Breath” Nelson. He opened for Johnny Winter and 38 Special and played many bike nights with his son Cory at the Tenth Street Saloon in Plainwell.

Nothing made Dennis happier than being Papa to his loved granddaughter, Layla, she was the light of his life. In his free time he enjoyed golfing, hunting and fishing with his son and attending concerts with his wife. On April 17, 1982 in Martin he married Joyce Doss who survives.

A jam session to celebrate Dennis will be held at 5:00 P.M., Saturday, September 26, 2020 at the Tenth Street Saloon in Plainwell.

Contributions in memory of Dennis may be made to a scholarship fund for his granddaughter, Layla’s education.

Offer Condolence for the family of Dennis T. Nelson