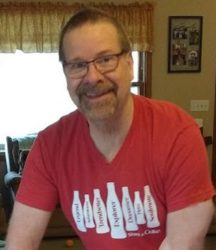 He was born April 2, 1963 in Kalamazoo the son of Raymond and Carolyn (Bryant) Snyder. Dennis was a 1982 Martin High School graduate. In 1983 in Martin he married Jeanne Solomon they were together for 7 years. Together they had two children, Ashley and Keith.

Dennis was very devoted to his work. He began by driving semi-truck for Solomon Livestock Trucking in high school. He later became a dispatcher for Coca-Cola in Grand Rapids, which led him to traveling and eventually working in their corporate offices in Atlanta, GA. Dennis was a mentor for many of his fellow employees. Most recently he had worked for Coca-Cola Consolidated in North Carolina.

He was preceded in death by his brother, Don Snyder, grandparents and granddaughter, Raegan Snyder.

Offer Condolence for the family of Dennis Snyder