You are here: Home / Obituaries / David A. VanFleet 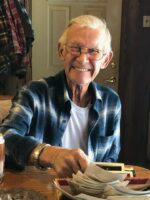 He was born October 30, 1941 in Plainwell, the son of Lovell and Elda (Hummell) VanFleet. Dave proudly served his country in the U.S. Air Force. For over 25 years he worked at Georgia Pacific until his retirement in 1997. During his retirement he worked in maintenance at Little River Casino in Manistee. In his free time Dave enjoyed hunting and fishing.

Surviving are his children, Chris (Todd) Banks of Cooper, Kelly (Craig) Jackson of Otsego, David (Colleen) VanFleet of Florida and Stacey Humphrey of Florida; several grandchildren and great-grandchildren; brother, Dick Reed along with many nieces and nephews.

He was preceded in death by his parents, wife, Ruth in 2021 and sister, Carol Gates.

Contributions in memory of Dave may be made to Wings of Hope Hospice.

Offer Condolence for the family of David A. VanFleet