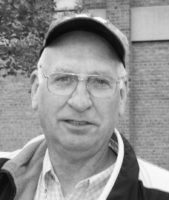 Darl Lee Hendrixson, 77, went to be with his Lord on May 21, 2020, after losing his battle with coronavirus.

Born in the Otsego, Michigan area, he was the son of Harley and Gladys (Brenner) Hendrixson. He graduated from Otsego High School in 1960, and went on to proudly serve his country for 4 years in the United States Air Force.

Darl owned and operated his own construction business, Hendrixson Construction, and served the greater Kalamazoo area with expert craftsmanship for over 45 years. He was previously married to Linda Wolf, sharing 23 years and two children together.

Darl was an avid outdoorsman who had a love and passion for archery, guns, hunting, and fishing. He also had a love for farming and fixing anything that was mechanical. He will be remembered by his family for his giving heart, his awkward sense of humor, his dedication and love for his kids, his ability to never be wrong, and mostly for giving life lessons that usually came in the form of some quote like, “Can’t never did nothing,” or “Let’s go! We gotta do something, even if it’s wrong.”  His family cherishes his memory, and will think of him often “up in that big pasture in the sky.”

He was preceded in death by his parents, Harley & Gladys, and his brother, Dale.

Funeral services are being arranged by Winkel Funeral Home, but will be delayed until full military honors can be given at his final resting place in Fort Custer National Cemetery.

In lieu of flowers, memorial donations can be made to the Rocky Mountain Elk Foundation.

Offer Condolence for the family of Darl L. Hendrixson