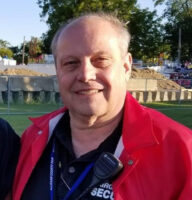 Dan passed away Friday, November 13, 2020 at Bronson Hospital in Kalamazoo.

He was born December 12, 1951 the son of James and Shirley (Nichols) VanLent. Dan was a graduate of Plainwell High School and lifelong resident of the area. He served his country in the U.S. Army. Dan had worked as a police officer for the City of Plainwell and then for Consumers Energy in Kalamazoo until his retirement in 2017. He also worked at Harold Ziegler in Plainwell and security at the Allegan County Fair.

Dan was the ultimate Disney fan and visited Disney World over 40 times. He enjoyed spending time with his grandchildren and was a lifetime member of the Gilmore Car Museum.

He was preceded in death by his father James in 2014.

Friends may visit with Dan’s family from 5-7 P.M., Tuesday, November 17, 2020 at the Winkel Funeral Home, Otsego. In accordance with covid -19 guidelines a limit of 50 people at a time will be followed along with masks and social distancing.

A private family funeral service will be held on Wednesday, November 18, 2020.

Contributions in memory of Dan may be made to Christian Neighbors.

Offer Condolence for the family of Danny J. VanLent