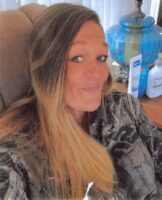 She was born September 29, 1984, the daughter of Daniel and Robin (Ulferts) Mulder. Danielle was a Plainwell High School graduate. She enjoyed her time working at Dino’s Diner in Allegan and had worked at Flex Cable in Howard City. Danielle was a fantastic cook and could do wonders in the kitchen. She enjoyed doing arts and crafts and spending time mushroom hunting. On September 29, 2016 at the Plainwell Assembly of God Church she married Richard LaFountain who survives.

She was preceded in death by her mother and grandparents.

Offer Condolence for the family of Danielle L. Bernard