You are here: Home / Obituaries / Courtney A. Olson 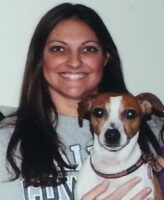 Courtney passed away Friday, April 22, 2022 at her home in Plainwell.

She was born September 6, 1980 in Rochester, MI, the daughter of David and Janice (McLean) Olson. Courtney graduated from Western Michigan University and was an accounting specialist at 7 Generations Architecture and Engineering Firm.

She was an avid Dallas Cowboys fan and enjoyed following the LA Lakers, especially Kobe Bryant. Courtney was passionate about animals and criminal justice reform. She volunteered at the Devoted Barn Animal Rescue in the Detroit area, as well as LuvnPupz Animal Rescue in Grand Rapids. She worked with Rhonda DeLong to bring the canine therapy program to the Cook County, Illinois jail system. Courtney was a supporter of Black Lives Matter and took great interest in social justice.

She was very independent, kind and tenderhearted, especially to her friends. She would do anything for those close to her. She loved being involved with caring for the neighborhood twins.

She was preceded in death by her father, grandfather, David L. Olson and grandmother, Ruth McLean.

A memorial service will be held at 11:00 A.M., Friday, April 29, 2022 at the Otsego United Methodist Church with Pastor Dan Minor officiating.

Contributions in memory of Courtney may be made to the  Devoted Barn Animal Rescue or to LuvnPupz in Grand Rapids.

Offer Condolence for the family of Courtney A. Olson