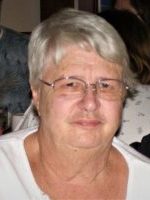 Char passed into the presence of her Lord and Savior Jesus Christ, Saturday, January 5, 2019 surrounded by her loving family at Alamo Nursing Home in Kalamazoo.

She was born June 29, 1937 in Plainwell the daughter of Charlie and Helen (Kelly) DeKam. In the 70’s Char had been a lunchroom mom at Cooper Elementary School. She was a skilled cake decorator and had made many cakes for different occasions over the years. Char also enjoyed sewing, knitting, bird watching and traveling.

On June 20, 1957 at the United Methodist Church in Plainwell she married James Hawkins. They spent 60 wonderful years together until his passing in January 2018.

She was preceded in death by her parents, husband and sisters, Joyce (Aapko) Nap and Marie Horak.

Friends may visit with Charlene’s family from 6-8 P.M., Tuesday, January 8, 2019 at the Winkel Funeral Home, Otsego.  A funeral service will be held at 11:00 A.M., Wednesday, January 9, 2018 at the First Baptist Church of Otsego with Pastor Paul Laborde officiating.

Burial will follow at West Cooper Cemetery in Cooper Township.

Contributions in memory of Char may be made to First Baptist Church of Otsego or the American Cancer Society.

Offer Condolence for the family of Charlene H. Hawkins