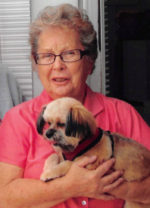 She was born December 9, 1933 in Mankato, Minnesota, the daughter of Rolf and Ruth (Peterson) Sorlie. Carol loved shopping and enjoyed trips to the casino, playing keno, golfing and playing cards at church on Tuesdays and with the ladies on Fridays. She was a member of the Otsego Elks.

She was preceded in death by her parents, husband and brother, William Sorlie.

A memorial service will be held at 4:00 P.M., Saturday, October 19, 2019 at the First Congregational Church of Otsego with Pastor Darin Youngs officiating.

Contributions in memory of Carol may be made to the Otsego VFW Post #3030.

Offer Condolence for the family of Carol J. Forcier