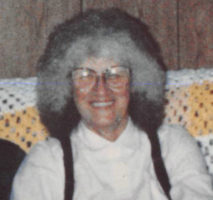 Bonnie passed away peacefully at home on September 12, 2020, after a long battle with diabetes and dementia (Alzheimer’s type). She was able to live out her life at home.

According to her wishes cremation has occurred. Bonnie was a life-long resident of Southwest Michigan. She was born and raised in the Kalamazoo area and lived her adult life in Otsego. She was married to Willard E. “Buck” Harper Jr. in a ceremony on August 25, 1951. He preceded her in death in October of 2018. As a young woman she briefly had a job outside the home but after she married, she spent her lifetime as a wife and mother.

She is survived by her brothers, Bob Simington and Glenn Simington; brother-in-law, Alfred and sisters-in-law, Terri and Eleanor.

Holiday meals and Sunday dinners were always a proud moment for her, lots of food and even more family all in her house. She was an avid reader until her eyes would no longer let her. When she was younger she loved to play cards with friends. During the winter months she enjoyed doing jigsaw puzzles. As long as Buck was able to fish, she would go with him in the boat with their dog Rudy. She was known to take care of her grandchildren from time to time. She and Buck were very close to his brother, Bernard and his common law wife, Edna. They made many trips to buy fishing stuff for the guys and enjoyed going out to eat.

In lieu of flowers contributions in memory of Bonnie may be made to the American Diabetes Association or to Alzheimer’s Disease Research.

Bonnie’s family would like to thank Pastor Joe Shaler of the Otsego United Methodist Church for his support of Buck and Bonnie through the years.

Offer Condolence for the family of Bonnie L. Harper