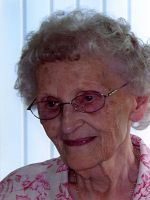 Bernice Dorothy Norton of Martin, passed away Tuesday, April 22, 2014, in Plainwell. Her unwavering faith in the God who paid for her sins has now enabled her to be received into His presence, where she will spend eternity!

Bernice Dorothy Samuelson was born on November 5, 1917 to Anton and Amanda (Engdehl) Samuelson. Her 96 years were filled with service to others and in later years her home became a place of hospitality for traveling family members and missionaries.

On December 23, 1939, she married Raymond Norton, who preceded her in death in 1981. They had seven children: Phillip Norton of Plainwell, John (Marsha) Norton of Portage, Dan (Shirley) Norton of FL, Mary Murray of Grant, Martha (Tom) Thornton of Martin, Tim (Karen) Norton of Kalamazoo and Joe (Peggy) Norton of Dorr; and then 16 grandchildren and 21 great-grandchildren with three due soon.

She was also preceded in death by her parents; siblings, George and Ruth; and a son-in-law, Joe Murray.

Friends may visit with Bernice’s family from 6 to 8 P.M. Friday, April 25, 2014, at the Winkel Funeral Home, Otsego. A Funeral Service will be held at 11:00 A.M. Saturday, April 26, 2014 at Watson Bible Church, Pastor Tim Farley officiating. Burial will follow at Hicks Cemetery.

Contributions in memory of Bernice may be made to Watson Bible Church.

Offer Condolence for the family of Bernice Norton