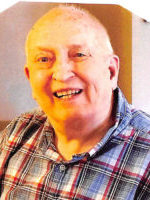 Berle passed away Saturday, June 1, 2019 at Friendship Village in Kalamazoo.

He was born July 14, 1926 in Augusta, the son of Lloyd and Pearl Finkey. Berle spent his childhood in Augusta and Delton with his brother, Louis and sister, Margaret. He graduated from Delton High School in 1946 and then served in the U.S. Army during WWII as military police in New York City. For 32 years he had worked for Michigan Bell Telephone Company until his retirement.

In his free time Berle enjoyed taking bus trips, gardening and working on his cars.

Friends he remembered and wished to thank are James Platt and James Yerchek who had worked with Berle at Michigan Bell Telephone Company; friends Dale Blanchard and Karen Baker. According to his wishes cremation has taken place.

A memorial service will be held at 2:00 P.M., Thursday, June 6, 2019 at the Winkel Funeral Home, Otsego, with Pastor Darin Youngs officiating.

Burial of ashes with Military Honors will take place at Fort Custer National Cemetery at a later time.

Contributions in memory of Berle may be made to Michigan Bell Telephone Pioneers, 3566 Michael Ave SW, Wyoming, MI 49509.

Offer Condolence for the family of Berle E. Finkey