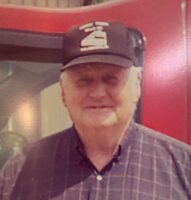 Ben passed away Friday, November 19, 2021 at his nephew’s home in Allegan.

He was born December 7, 1938 in Hinsdale, Illinois, the son of Steven and Gladys (Cregar) Redmon. As a young man Ben poured concrete until his mid 50’s. He went on to be a self- employed truck driver, transporting RV’s around the U.S. and Canada. In his free time Ben enjoyed watching old Western movies. On April 2, 1970 he married Barbara Johnson who passed away in 2010.

Surviving are his nephew, Terry Redmon; step-children, Bill, Pam, Bob and Al; sister, Jo Ann of Dowagiac; brother, Tom of Florida along with many nieces and nephews.

He was preceded in death by his parents; wife; brothers, Bill, Jim and Bob; sister, Jane and step-children, Doug and Caroline.

Contributions in memory of Ben may be made to Wings of Hope Hospice.

Offer Condolence for the family of Benjamin C. Redmon