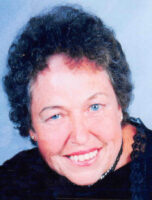 She was born May 9, 1933 in Ada, the daughter of Albert and Petranella “Nellie” (Doezema) Lewis. Bea enjoyed flower and vegetable gardening and farming. She was active in township politics and for over 20 years was an election inspector. She was also involved with 4-H and taught woodworking. Bea was a member of TOPS and was crowned queen for losing the most weight in the state. On November 16, 1951 in Cannonsburg, she married Edward Hill who survives.

She was preceded in death by her parents and siblings, Dolores, Warren, Marilyn and Rosalie.

A private family visitation and funeral will be held at the Winkel Funeral Home in Otsego.

In lieu of flowers contributions in memory of Bea may be made to Wings of Hope Hospice of Allegan.

Offer Condolence for the family of Beatrice L. Hill