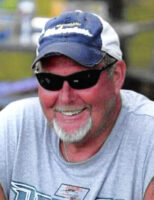 Barry passed away unexpectedly on Monday, March 29, 2021 in Kalamazoo.

He was born January 29, 1958 in Kalamazoo, the son of Percy and Pauline (Deem) Maystead. Barry was a 1976 Portage Northern High School graduate. For 20 years he was a truck driver for Roadway until his retirement in 2008.

Barry was an avid golfer and bowler and had played on several leagues. He enjoyed being outdoors, fishing, spending time on his boat, staying out at the lake and riding motorcycles and snowmobiles. Barry had a great sense of humor and was known for always cracking jokes. In 1977 in Kalamazoo he married Sandra Beer who survives.

Contributions in memory of Barry may be made to the Down Syndrome Association of West Michigan.

Offer Condolence for the family of Barry G. Maystead