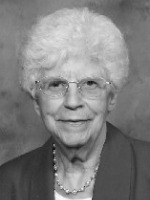 Mary “Alice” Hummel of Otsego, passed away Thursday March 1, 2007 at her home. Alice was born November 3, 1925 in Otsego, the daughter of Robert & Estella (Thompson) Guidebeck. She was a parishioner at the Otsego Church of God and was active in the sewing circle. On January 11, 1947 in Kalamazoo, she married Benjamin Hummel, who survives. Also surviving are 3 daughters, Sally (Gene) Hebrock of Kentucky, Sue Cinka of Otsego, Robin (Ken) Clark of Battle Creek, her daughter-in-law, Karen Hummel of Plainwell; 9 grandchildren; 3 great-grandsons; 1 sister, Lucile Leonard of Otsego, a brother, William Guidebeck of Comstock Park; 2 sisters-in-law, Carley and Allene. She was preceded in death by her son Ronald Hummel in 2003, 1 brother, Robert; 2 half sisters, Helen Stevens and Meurle Pries and 2 half brothers, Lovell VanFleet and Glenn VanFleet. Cremation has taken place. A memorial service will be held Monday, March 5, 2007 at 1 p.m. at the Otsego Church of God, Rev. Timothy M. Foreman officiating. A luncheon will follow. Burial of ashes will take place later at Mountain Home Cemetery, Otsego. Those desiring may make memorial contributions to the Otsego Church of God.

Offer Condolence for the family of Alice Hummel